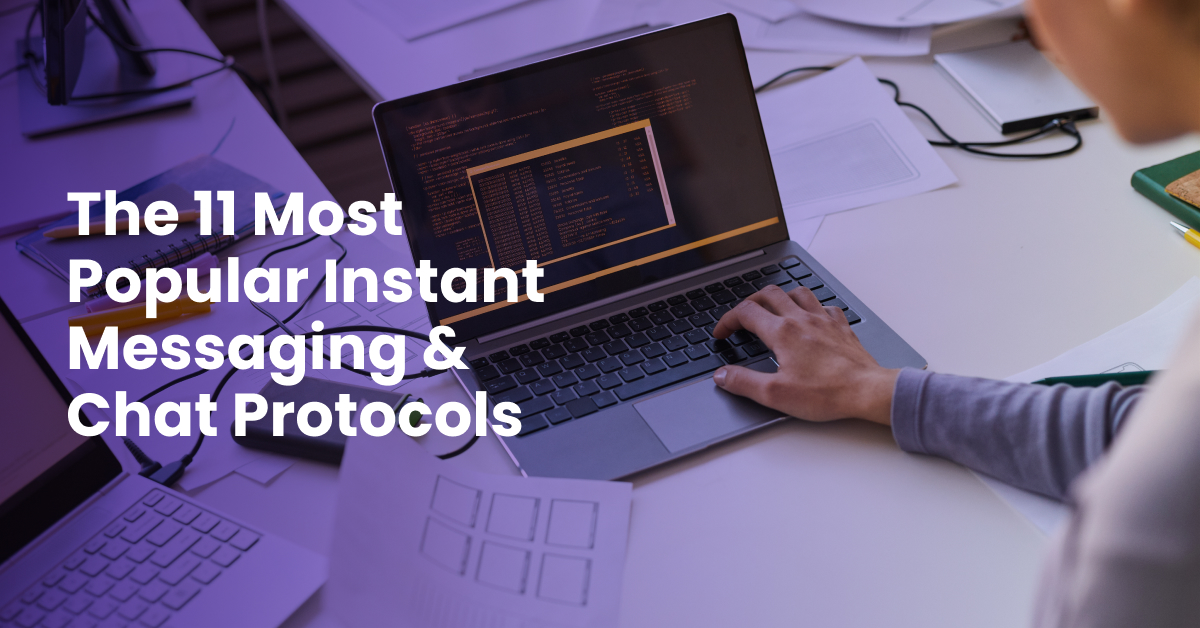 Discover the 11 most popular chat protocols and services that keep us connected and find out how to pick the right service for you. 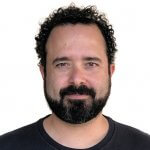 Understanding the tech behind chat apps is vital. It helps you understand what’s possible in the instant messaging market. It’s also helpful comparing different collaboration software for your company.

What are the most popular instant messaging and chat protocols?

Follow the list all the way to the bottom to see the advantages and disadvantages for each one.

Launched in 2011 by Google, WebRTC is a communication protocol built for web browsers. The protocol supports video calls, but this functionality requires a separate server. The protocol has significant appeal for software companies looking to build their online services.

Among today’s communication protocols, WebSocket is relatively well established. It was launched in 2008 and started to attain widespread adoption in 2010. WebSocket relies on a TCP connection. WebSocket can accommodate many connections to serve as the foundation for large-scale instant messengers.

IRC is often considered the chat platform that made the rise of messaging platforms platform. According to one estimate, IRC once had over a million users in the early 2000s. While IRC still has some niche uses and specialized communities, it is much closer to email in spirit than a true chat platform.

IRC’s long-term success as a real-time text messaging platform is nonetheless remarkable. If you are building a chat app from scratch, studying the longevity of Internet Relay Chat may be worth the time. Remember that the platform was initially developed before broadband Internet access was widely available, so it is not an excellent match for today’s network capabilities.

XMPP is a modern instant messaging protocol that supports popular chat functionalities like voice calls, video calls, and file transfer. You can build a chat application or instant messengers based on XMPP.  Depending on your goals, you could build consumer software or a corporate chat app based on this protocol.

As a form of communication, XMPP can support various uses and optional features. Since it is much less well-known than apps like Google Talk or Facebook Chat, you may have to plan for additional training time to help your users adopt the platform.

Unlike the other messaging protocols covered above, MQTT is best suited for a specific type of device. MQTT is best used for Internet of Things (IoT) devices and applications. For example, an industrial device at a factory might need the ability to send messages about the temperature or pressure of a specific piece of equipment. MQTT is an excellent choice for that use case. MQTT is generally not well suited for consumer software applications.

The relatively weak out-of-box security features are another drawback. Fortunately, this problem can be mitigated by working with security providers. If this drawback is neglected in your implementation, you may introduce more risk into your environment.

The SIMPLE protocol approach to instant messaging offers both session mode and non-session (i.e., page mode) approaches to messaging. In addition, the SIP SIMPLE protocol also supports presence which means you can detect when users are online. The protocol doesn’t offer built-in support for features like buddy lists (also known as contact lists) or message histories. Therefore, it might be a good option for consumers.

Announced in 2003, AMQP has an unusual origin. A developer at JPMorgan Chase created it. Other companies, including Microsoft, Progress Software, and Bank of America, became involved in the protocol. Like the MQTT protocol, AMQP runs on the TCP layer of the network.

AMQP’s corporate background means it offers a good foundation for sophisticated applications. In business communications, AMQP may be a good choice for communication between machines. The AMQP approach to instant message delivery emphasizes delivery and reliability. As a result, it is a good choice for enterprise instant messaging where accuracy is paramount, like financial use cases.

Three More Chat Apps We Have To Cover

The final two chat apps are different from the others covered above. These instant messaging systems are connected to a broader social network. The significant influence of Facebook and Google in the online services world meant this guide would be incomplete unless we covered them.

These are best seen as consumer instant messaging clients rather than corporate messaging systems. These services have so many registered users that these clients have shaped user expectations. No discussion of electronic messaging is complete without covering these apps.

Due to its focus on events and group interactions, Arena Live Chat is not suitable for other uses. If you need a business chat app connected with your workflow systems, Arena may not be the best choice. Arena is also focused on text messaging rather than video or voice chat.

As a consumer instant messaging service, Facebook Messenger is one of the most popular clients in the world. According to one estimate, there are more than one billion Facebook messenger users today. Since it offers so many features, it is no surprise that Messenger is a relatively large app - it takes over 100 MB in storage in most cases.

From a marketing perspective, Facebook Messenger is interesting because there are third-party services that make it easy to create chatbots. This business approach to Facebook Messenger can boost your lead generation and improve basic customer service.

Initially launched in 2014, Google Messages has gradually become one of the most popular messaging apps. Also known as Messages by Google, the app has an estimated 1 billion installs. In 2021, instant messenger added support for an end to end encryption.

Google Messages added support for rich communication services (RCS) in 2019. This enhancement means that the app no longer relies on the cellular network. Google Messages does not require a mobile app - the chat client is available through a browser. Adding support for RCS makes Google Messages more competitive with Apple iMessage.

Now that you have learned about some of the most popular instant messages and chat protocols, it’s time to decide which chat apps best suit your needs.

Choosing A Chat Service For Your Business: What Matters?

When choosing a chat app for your business, consider a few things. There is no single chat app that is suitable for every business need. Instead, you might need a handful of chat apps to provide a comprehensive solution to your customers.

When you compare different chat programs, a key difference quickly becomes apparent. Many chat apps emphasize private conversations between two users. Like Arena Live Chat, other chat services are more focused on chat windows for events. That’s not all. Arena Live Chat also offers one on one messages between users.

Few users (or companies!) have the patience to learn a complex chat protocol. Asking an IT department to spend weeks or even months learning how to use WebRTC or MQTT may not be realistic given your other technology projects.

Instead, it is best to choose an easy chat solution for companies and end-users to access. Arena Live Chat is explicitly designed for fast installation. Most companies install it on their website in less than 10 minutes.

The quality of the chat user interface is critically important. Your customers will spend a lot of time interacting with friends (and your employees) through chat. You spend time testing the chat app before making it a core part of your business.

Specifically, we recommend asking non-technical employees to test the chat app. If they have significant difficulties using the chat app, try something else! If your customers have problems using your chat app, they will simply give up and use a different method - like email or phone - to contact your business.

Security risks are ever-present in the online world, including chat apps. When you give your users a chat window, some people may view that option as an effective attack opportunity. There are a few ways to mitigate this threat to avoid endless security investigations.

A common way to enhance security and privacy concerns is to rely on end-to-end encryption. In addition, you can apply controls to your user IDs. By requiring users to register before joining a chat experience, you can reduce security threats. Finally, don’t rely on the chat window to do all the work. It is also essential to provide security training to your employees to provide a security-conscious experience to end-users.

Now that you know about the most popular chat protocols and chat clients on the market, you have a choice. The first option is to choose a messaging protocol, select a client and spend time customizing the chat app. This option is a good choice if your company has significant technology development resources and the desire to create highly customized solutions.

The second option is to select a fast chat service, easy to install and requires minimal setup. Sign up for Arena Live Chat today to see what a fast and easy-to-use chat experience looks like. It’s free to try, and it can be installed in just a few minutes.